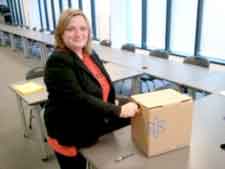 Research assistants at Stony Brook University in New York stood tough for 10 years, organizing, mobilizing and calling out management for trying to get rid of their union. Now, RAs have ratified their first contract.

The 683 RAs are PhD candidates who work for faculty at the university’s Research Foundation, which is supported by federal funds. They ratified the three-year agreement with a 78 percent “yes” vote.

Kasia Sawicka, an RA in biomedical engineering, helped found the union and bargain the first contract. She said RAs are proud “that at a moment in American history when collective bargaining rights are under attack, the hard work and tremendous energy invested into the struggle of the Research Assistants Union at Stony Brook University has paid off.”

The RAs thanked CWA Local 1104, which supported their long fight. Local 1104 President George Bloom said the university “tried every trick in the book to prevent the best and the brightest from forming a union to protect their rights and the rights of future research assistants. RAs realized early on that a union and a collective bargaining agreement were needed. They did it, and CWA couldn’t be prouder.”

Jim McAsey, organizing director and mobilization coordinator for CWA Local 1104, said the research assistants “won this contract with grassroots, movement-based unionism. They recognized their power, organized, took direct action, and commanded respect from the Research Foundation. Their commitment inspires me and should inspire us all.”

The unit is already moving ahead on next steps: electing union stewards and division coordinators for academic departments. The contract increases RA salaries, establishes a fair grievance process, and expands dental and vision coverage, among other improvements.